50% of the world’s population already live in water-stressed regions [3]. Freshwater reserves are scarce and agriculture uses the lion’s share[4].

The situation is expected to worsen due to climate change and growing population and adopting a plant-based diet can make a difference probably.

Freshwater is a precious commodity and there is no life without it. But how much of it is readily available?

The yellow circle represents the share of freshwater fit for human consumption, less than 3% of the total water stocks on the planet[2].

However, most of the freshwater reserves are stuck in glaciers or in aquifers deep under the surface and the leftover is unevenly distributed.

And how much is received through precipitation every year? The answer is the little black dot (if you can spot one) in the above diagram.

Water-Stressed Regions of the World

Due to the uneven distribution of the water stocks, it’s no wonder that more than 3.5 billion people or 50% of the world’s population are living in either water-stressed or water-scarce regions already [3].

Below graph highlights those areas.

The situation is getting so worse in some areas that almost 40% of irrigated areas are now reliant on groundwater supplies and as a result, the underground freshwater reserves are depleting at an unprecedented level [4].

Experts believe that numbers are going to get even worse in the coming years and as per UN estimates, by 2025, 2/3rd of the world population would be living in water-stressed regions [5].

Any guesses how much water would it takes to produce all the food we eat? A staggering 70% of the freshwater withdrawls for human use is used for agriculture purposes [4]. 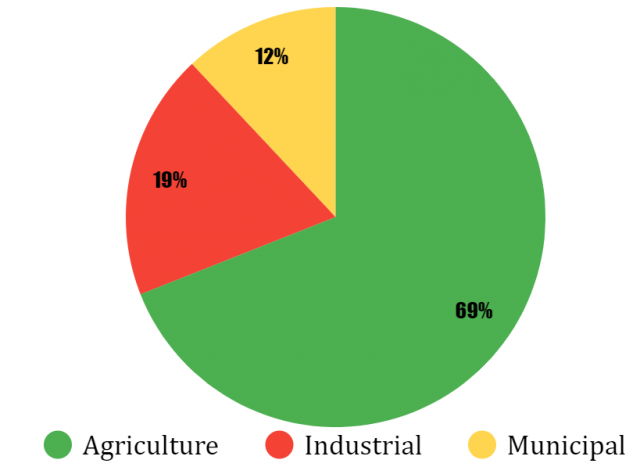 A significant portion of freshwater water withdrawals for agriculture purpose goes in raising animals for livestock and dairy industry. However, animals do eat grass right?

Yes, that’s the case but with the gigantic livestock population, there’s just not enough food and hence they need to be fed crops, especially the animals breeding on industrialized farms.

UN estimates that almost 1/3rd of all the foods we produce goes to feeding the animals. In a nutshell, our food choices, to an extent, would define the water-related problems of the coming generations.

In this section, we will be only focussing on the dietary factors responsible for water shortage.

On average, producing meat and dairy products relatively requires a lot more water than plant-based foods. It’s not because these animals are thirsty and drink a lot of water, but it’s pretty much the amount of water that goes in to producing the feed. 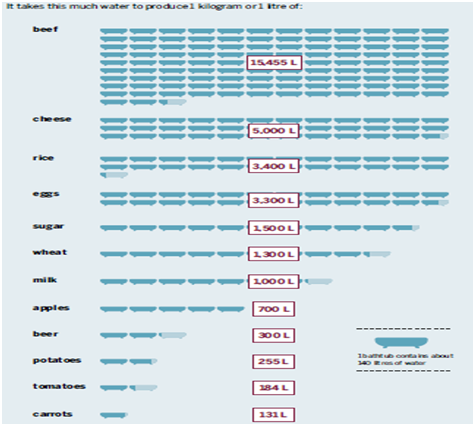 So, 15,500 Litres of water to produce 1 Kg of Beef? Just for the record, you can probably do one of the following things with that much freshwater.

As per United Nations stats, the global meat production for 2017 exceeded 330 million tonnes of which more than 57% came from pigs and cattles, the two biggest water-consuming products[8].

There are over 31 billion animals in the world kept as livestock as per the 2016 WWF report[1]. 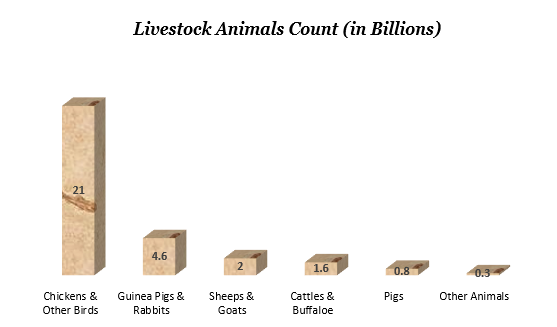 Most of the water used for servicing and drinking water for animals returns to the environment in the form of wastewater and manure.

As per some estimates, approximtely 80% of wastewater worldwide is dumped – untreated into water supplies and UN has designated wastewater coming from agriculture as one of the biggest sources of water pollution [9].

In particular, the water coming from agricultural lands and slaughterhouses are full of harmful nutrients and pesticides coming from animal wastes, antibiotics and hormones, chemicals from tanneries, fertilizers and pesticides used for feed crops, and sediments from eroded pastures[3].

As a result, a lot of the freshwater reserves are deemed unfit for drinking and resulting fish stocks shrinking.

As the world population is estimated to surpass 9 billion by 2050 and meat consumption expected to double, freshwater availability is only going to get worse[1].

The world watch institute has predicted that if meat consumption continues to rise rapidly, the amount of water needed to grow animal feed would double by the middle of the century. Below graph paints the grim reality if the above predictions come true. 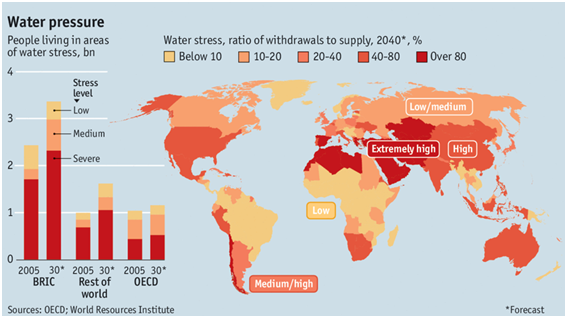 Compared to current times, the no. of people living in water-stressed regions could increase dramatically and more than half of the world’s population could be affected by water scarcity by the year 2025[13].

To meet the ever-growing food demand, the world’s food production must increase substantially, which is going to put tremendous pressure on the environment and eco-system to produce enough food for everyone.

Many of the developing and developed countries under absolute water scarcity might have to import a significant portion of their cereal consumption. Those unable to finance these imports will be threatened by famine and malnutrition[3].

Groundwater provides drinking water to at least 50% of the global population, which means more water extracted for irrigation equates to fewer reserves for drinking water left for future[11].

With less and less water being available from freshwater bodies like river, lakes, streams etc, agricultural lands would keep exploiting underground water reserves to keep up with the demand.

Over-exploitation of the groundwater reserves leads to deterioration of water quality and salinization of land, which in turn leads to less productive agricultural land.

Make no mistake, Climate change and rising global temperatures would also play its hand and make the situation even worse.

Rising temperatures and shifts in hydrological regimes of major rivers might all play a substantial impact on agricultural water demand[12].

Hence, the big question we need to be asking probably is that is it worth continuing pumping ever-scarcer resources into the raising of livestock?