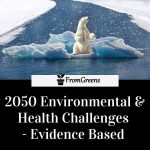 It is a widely known fact that our food choices affect our health and have significant ramifications on the state of the environment.

If the current dietary patterns continue for the coming decades i.e. high animal product and low plant-based products consumption, then we will have to overcome some massive challenges in the future.

World’s population is expected to exceed 9 billion by 2050 [1]. What that means is we might have to more than double the amount of food we are currently producing to feed the growing population.

United Nations estimates that the consequent increase in food productions by 2050[1] :-

Many high-income countries are going in to a transitioning phase as far as dietary patterns are concerned and the demand for animal products has started declining or is about to peak. More and more people are adopting a plant-based diet.

However, researchers believe that rising income levels along with urbanization could drive the next growth wave for animal products in the developing countries in the coming decades [1]. 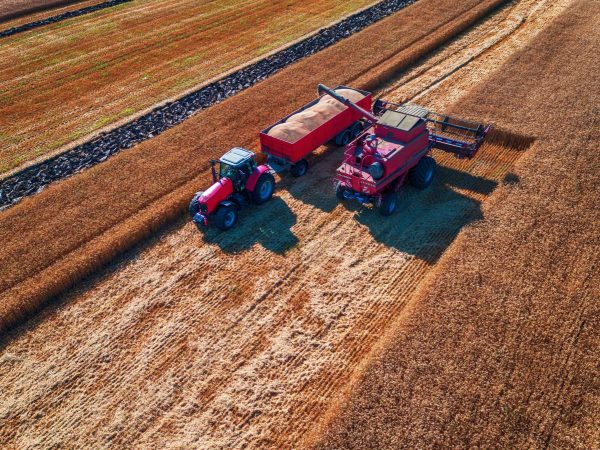 To meet the increasing food demand, 70 million hectares of additional agricultural land (an area twice the size of Germany) needs to be made available [1].

As per projections, most of the additional land is projected to come from developing countries. On the contrary, the amount of land used for agriculture might decrease in the developed countries[1]. 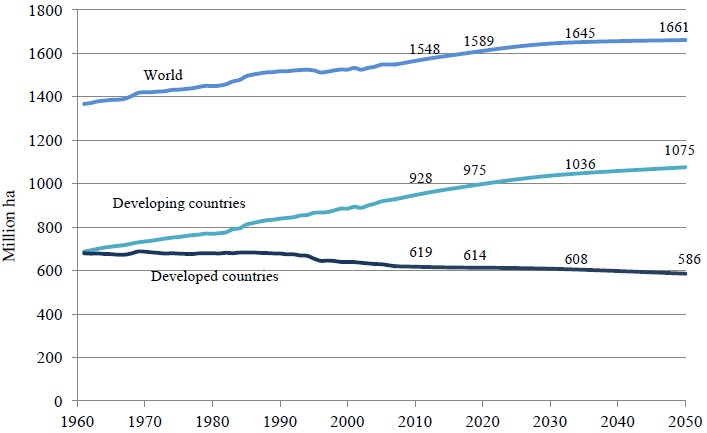 Source: How to Feed the world in 2050, FAO
References
Advertisement
Environment

Producing more food means consuming more environmental resources which are scarce and already under a lot of pressure.

Livestock waste and excessive use of fertilizers have already polluted the oceans, groundwater reserves and arable land along with other industrial wastes.

As a result, oceans are getting warmer, freshwater reserves are shrinking and rainforests are disappearing rapidly to make up for the loss of arable land.

The greenhouse gas emissions from agriculture, deforestation and soil erosion is expected to increase in the coming decades and further contribute to global warming.

Tropical rainforests are the lungs of the planet and they are at risk of extinction if the current rate of deforestation continues. (18.7 million hectares annually – equivalent to an area of 27 soccer fields disappearing every minute) [3].

It is estimated that between now and 2050, around 290 million hectares of tropical forest, an area area equivalent to the size of India will disappear from the face of the earth[4].

More than half of the forest cleared lands would be used for the livestock industry, either for cattle grazing or for growing livestock feed [5]. Below map from WWF highlights the deforestation fronts.

Every year around 25-40 billion tonnes of topsoil is lost as a result of soil erosion, either due to deforestation or due to livestock farming [8].

The degraded land reduces crop yields as it cannot hold on to nutrients, water and carbon. As a result, 7.6 million tonnes of cereal production is lost every year [8].

The land is also degraded due to the excessive use of fertilizers and pesticides and the continuous ploughing of fields. If no action is taken, then by 2050 cereal productions could be compromised by approx. 253 million tonnes [8].

This yield loss would be equivalent to removing 1.5 million square kilometers of land from crop production – or roughly all the arable land in India and would also release a large amount of carbon into the atmosphere [8].

There is no doubt that climate change will affect every aspect of food production.

Livestock release greenhouse gases (GHG) as a by-product as part of their digestive process referred to as enteric fermentation. Animal waste and the use of fertilizers are also a source of greenhouse gas emissions along with land-use changes.

As per the latest estimates from the UN, agriculture-related carbon emissions caused due to livestock farming and land-use changes are responsible for almost 25 % of global warming.

As the world’s food supply is expected to double, more land and livestock animals would be required than ever before probably leading to more deforestation, land degradation and soil erosion.

A very progressive study published in 2016 by the National Academy of Sciences, US estimated the impact of the livestock industry on the environment and on our health by 2050 [10] –

Based on the historical GHG emissions trends & United Nations estimations on food productions in the subsequent decades, the authors highlighted the following reductions in GHG emissions from agriculture, based on dietary patterns[10].

Reduction in emissions from a vegan diet was attributed to lower consumption of meat, dairy and poultry products [10].

As we know, what we eat greatly affects our health. We have already highlighted the link between the occurrence of various chronic diseases and consuming a diet high in animal protein and low in plant protein.

World Health Organization (WHO) claims that cancer is the 2nd leading cause of death and was responsible for 9.6 million deaths in 2018. i.e. 1 in 6 deaths globally [12].

Looking at the projections for 2040, it is estimated that the total no. of deaths due to cancer could go up by a staggering 71% [13].

Furthermore, mortality rates for colon or colorectum cancer, the second leading cause of cancer-related deaths could go up by 84% [13]. Multiple studies have established a strong correlation between the risk of colon cancer and meat consumption [10,14,23].

The leading causes of rising deaths due to colorectal cancer in the coming decades could be attributed to the increasing consumption of meat products, obesity and alcohol to name a few [15,16].

Dairy and certain types of fish consumption have also been linked to the risk of developing prostate as well as other cancers. However, the evidence is limited and not as strong as that of colorectal [14].

On the other hand, eating more fruits and vegetables can reduce the risk of cancer[10,23].

Cardiovascular diseases (CVDs) are the biggest killers and more people die annually from CVDs than any other cause.

Harmful substances like carnitine and haem iron, high salt content and saturated fats found in animal products (meat and dairy products) are linked to a high risk of CVD [18,19,20].

Energy-dense foods, obesity, harmful substances found in meat (Haem iron, Nitrates) and fatty acids found in meat as well as dairy products, are all related to high risk of diabetes [21,22].

A 2016 study discussed in the previous section also highlighted the global mortality rates by 2050 for the 3 possible dietary patterns i.e. Following a healthy diet as prescribed by WHO, vegetarian diet or a vegan diet.

Reduction in Global Deaths due to all causes

Reduction in Global Deaths due to Non-Communicable diseases*

Deaths Avoided per year (in Millions)

4: Jonah Busch and Jens Engelmann. (2015). The Future of Forests: Emissions from Tropical Deforestation with and without a Carbon Price, 2016–2050 – Working Paper 411. Centre for Global Development

8: FAO and ITPS. 2015. Status of the World’s Soil Resources (SWSR) Food and Agriculture Organization of the United Nations and Intergovernmental Technical Panel on Soils, Rome, Italy. Accessed at http://www.fao.org/3/a-i5126e.pdf

11: WHO 2018, Healthy Diet. Accessed at https://www.who.int/news-room/fact-sheets/detail/healthy-diet

12: WHO 2018, Cancer. Accessed at https://www.who.int/news-room/fact-sheets/detail/cancer

14: American Institute for Cancer research. Meat, fish and dairy products and the risk of cancer. Accessed at https://www.wcrf.org/dietandcancer/exposures/meat-fish-dairy

17: WHO Projections of mortality and causes of death2016 to 2060. Global summary projections.xlsx Accessed at https://www.who.int/healthinfo/global_burden_disease/projections/en/

23: Cancer Research UK. Does having a healthy diet reduce my risk of cancer? Accessed at https://www.cancerresearchuk.org/about-cancer/causes-of-cancer/diet-and-cancer/does-having-a-healthy-diet-reduce-my-risk-of-cancer

4: Jonah Busch and Jens Engelmann. (2015). The Future of Forests: Emissions from Tropical Deforestation with and without a Carbon Price, 2016–2050 – Working Paper 411. Centre for Global Development

8: FAO and ITPS. 2015. Status of the World’s Soil Resources (SWSR) Food and Agriculture Organization of the United Nations and Intergovernmental Technical Panel on Soils, Rome, Italy. Accessed at http://www.fao.org/3/a-i5126e.pdf

11: WHO 2018, Healthy Diet. Accessed at https://www.who.int/news-room/fact-sheets/detail/healthy-diet

12: WHO 2018, Cancer. Accessed at https://www.who.int/news-room/fact-sheets/detail/cancer

14: American Institute for Cancer research. Meat, fish and dairy products and the risk of cancer. Accessed at https://www.wcrf.org/dietandcancer/exposures/meat-fish-dairy

17: WHO Projections of mortality and causes of death2016 to 2060. Global summary projections.xlsx Accessed at https://www.who.int/healthinfo/global_burden_disease/projections/en/

23: Cancer Research UK. Does having a healthy diet reduce my risk of cancer? Accessed at https://www.cancerresearchuk.org/about-cancer/causes-of-cancer/diet-and-cancer/does-having-a-healthy-diet-reduce-my-risk-of-cancer