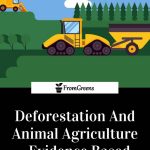 Every year for the past 40 years, approximately13 million hectares of forest land (an area equivalent to the size of Greece) has been converted to agricultural use[4].

Deforestation is the second leading cause of climate change after burning fossil fuels and agriculture is responsible for 80% of deforestation worldwide [18, 21]. The current deforestation trend poses a direct threat to the existence of tropical rainforests and the millions of species inhabiting there.

Of the 13.2 billion hectares of the land on earth, Forest covers almost 30% of the world’s ice-free surface [2]. 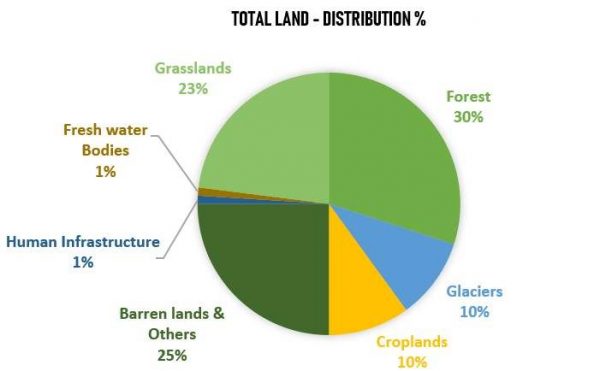 Forests, also referred to as ‘the lungs of the planet’ make vital contributions to both people and the planet by following ways.

Of the 3 broadly classified forest types, tropical forests are the ones that have witnessed significant deforestation in the past few decades.

These forests cover an area almost equivalent to the area of South America or 15% of the world’s land and are spread across South America (Amazon basin), Central Africa (Congo Basin) and the Himalayas in south-east Asia [7]. 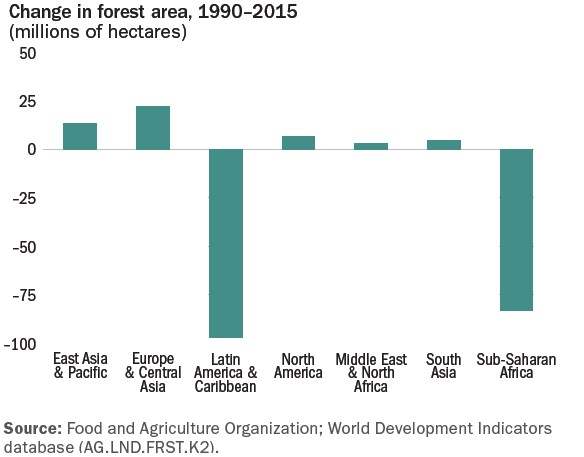 The above graph indicates the areas where forest areas have been lost and gained in the past 25 years. The greatest losses have been sustained in the Amazon and Chaco tropical rainforests of South America.

Almost 17% of the Amazon rainforest (equivalent to the area of South Africa) in the past 50 years has been converted into agricultural land and used either for cattle ranching or for growing animal feed [8,9].

However, Agriculture is responsible for 80% of deforestation globally and 80% of the agricultural land is used either for producing animal feed or for pastures[1,2].

Hence, for the below analysis, we would only be focusing on the impacts of producing meat, dairy products & palm oil as an exception on Forests [1,2]. 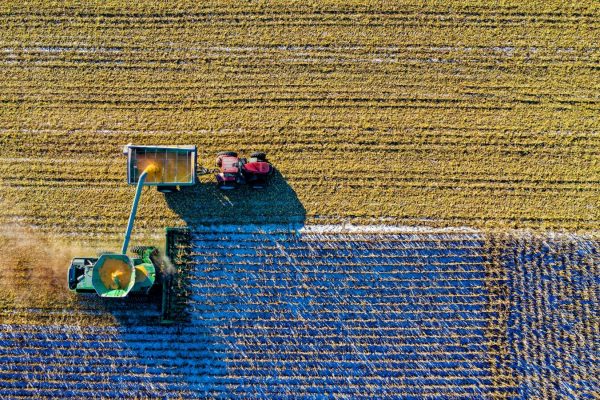 As per the latest stats from the United Nations, an area the size of France has been converted from rainforest to agricultural land, mainly to grow animal feed such as soybean and corn[10].

The converted soy fields are shared predominantly between 3 of the biggest top soy exporters, Brazil, Argentina and Paraguay.

The biggest buyers of these crops are the Asian and European countries that import the produce to feed it to the animals raised for their meat and dairy products[10].

Soybean or soy is high in protein and 80% of Amazon soy is destined for animal feed[2].

Unlike grass-fed animals, livestock animals raised on industrialized farms for meat and dairy products can reach their market weight much quickly if fed on soy and corn crops[11]. 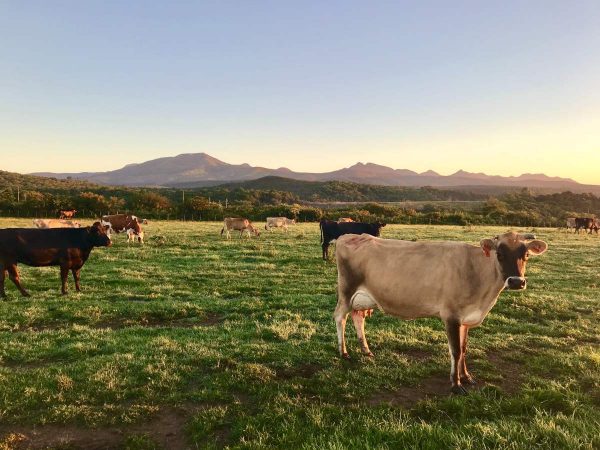 Multiple studies have attributed cattle ranching (raising animals on farms and pastures) as one of the biggest reasons for deforestation in the amazon [1,12,13].

A WWF report states that cattle ranching, along with soy cultivation is responsible for 80% of deforestation in virtually every country that shares the Amazon forests [13].

Raising cattle on forest land is a relatively cheap and attractive option since they have a low maintenance cost. Additionally, forested land is quite reasonable to buy and hence it encourages expansion and deforestation.

Furthermore, an interesting fact is that two of the biggest cattle meat exporters, Brazil and Argentina have more cattle than humans, which gives an indication of the area and resources needed to raise these animals [10].

In a nutshell, the world’s biggest rainforests are destroyed to raise cattle and the meat is then exported across the globe.

When talking about deforestation, Palm oil production and its impact on the world’s rainforests deserves mention although it is not related to meat and dairy production.

Palm oil production has increased ten-fold to 6-million hectares per year in the past few decades. That has led to widescale deforestation particularly in the Southeast Asian tropical forests of Malaysia and Indonesia[14].

These forests are one of the most biologically diverse habitats on Earths, home to a few diverse species found nowhere else on Earth now at risk of extinction. [14].

However, they are at risk of extinction if the current rate of deforestation continues [14].

Since the demand for meat products is expected to double by 2050, more rainforest is likely to go under the axe to meet the ever-growing food demand[15].

If the current rate of deforestation, we might lose a further 170 million hectares of rainforest by 2030 equivalent to 6 times the area of Japan [10,16].

Tropical rainforests, along with its trees, leaves, canopy provide shelter and protection to many vulnerable insects and plant species.

When trees in lush green forests are cleared for agriculture or commercial purpose, all the forest essentials go along with it disrupting the entire ecological balance and loss of biodiversity.

Forest soil supports an abundance of life because fallen vegetation and forest canopy provides nutrients to the soil. The root structures hold the soil together preventing erosion.

With deforestation, the land becomes depleted of nutrients, able to hold less water and and soil plus its nutrients are vulnerable to being washed away.

Billions of tonnes of fertile and productive soil are washed away into rivers and streams every year due to deforestation and other land-use changes [6]. 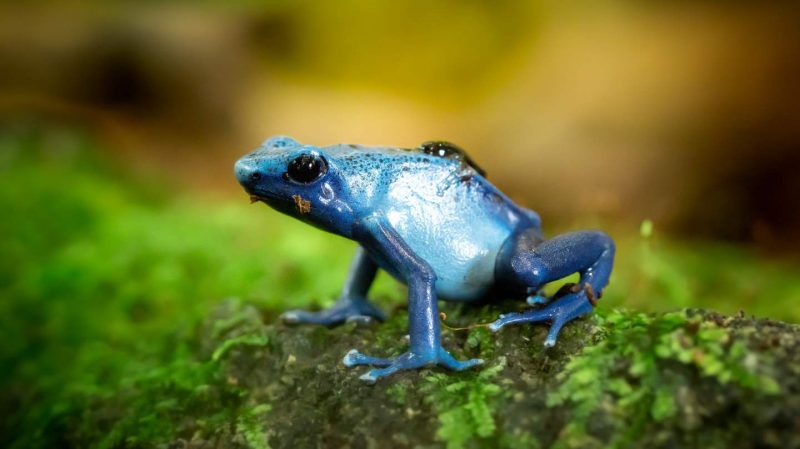 As per estimates, tropical rainforests like Amazon are home to 10% of known species on the planet. Amazon’s rivers flow for more than 6600 km and contain the largest number of freshwater species in the world [20].

Forest canopies play an essential role in preventing extreme temperature swings by blocking the sun’s rays during the day and retaining heat at night.

When the rainforests are cleared for agriculture and other purposes, most of these species lose their natural habitats and many are facing extinction.

More than a billion people need access to the forest products, goods and services for their survival [18].

The food security and livelihood of many of the world’s poorest rural population depends on the wellbeing of these forests and trees.

The role of forests in maintaining the carbon balance of the planet can’t be undermined. A tropical rainforest can hold up to 200 tonnes of carbon per hectare.

However, when the land is converted to farmland or pasture, the no. drops to 8. Yes, that’s right, forest land can hold 23 times more carbon than farmland [17].

No wonder that deforestation is one of the leading cause of global warming after burning fossil fuels and accounts for 20% of all greenhouse emissions, more than the emissions from the entire transport sector [18].

On the other hand, if forests are preserved properly, they can absorb around 2 billion tonnes of carbon dioxide every year from the atmosphere [18].

In a nutshell, would our dietary preferences, to an extent, shape the future of the forests and their role in controlling global warming as well as protecting vulnerable species?