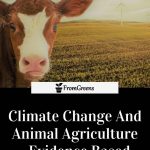 Animal farming, along with deforestation is one of the biggest sources of greenhouse gas emissions (GHG) and almost 25% of human-caused global warming can be attributed to agricultural-related activities [1]. Thus, climate change and veganism are closely related.

With the food demand expected to increase by 70% in the coming decades due to the ever growing population, would the global warming process intensify?[2].

To put it simply, human activities such as burning fossil fuels, heat production, deforestation etc. are responsible for emissions of certain greenhouse gases in the atmosphere.

These gases are capable of trapping heat emitted from the sun and thereby warming the planet.

The pie-chart below indicates the greenhouse gas emissions by source and their contribution to global warming.

As per IPCC’s report (UN’s Climate Change related department), the burning of fossil fuels and heat production is the biggest culprit [1].

Livestock farming and Land-use changes (emissions due to deforestation and soil erosion) take the second spot with 24% of the total emissions as highlighted in the chart below [1].

However, one particular study from world watch claimed that the above agricultural related emission estimates were modest and as per their research, almost 50% of the total greenhouse gas emissions could be attributed to agricultural practices [3].

In 2017, for example, 32 billion animals were approximately used in the livestock and dairy industry.

Having said that, GHG emissions vary as per the food item produced and certain items release more GHG than others.

Emissions as per agricultural items 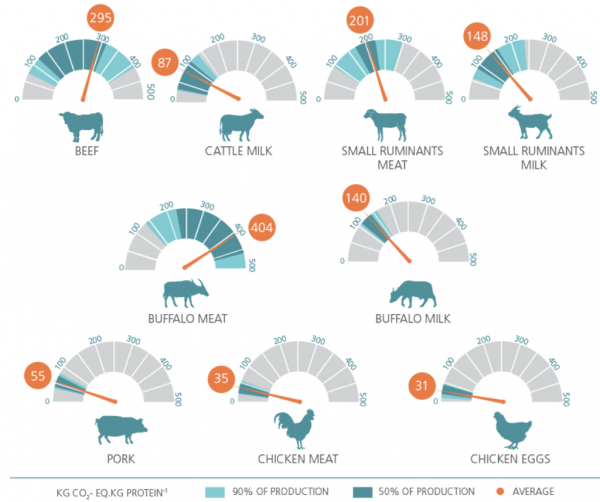 To put the numbers in perspective, the amount of greenhouse gas released while producing a single kg of cattle meat, for example, could be equivalent to the GHG emissions from the following activities [11].

The below map shows greenhouse gas emissions by country caused due to livestock farming and land-use changes segmented by animal sources. 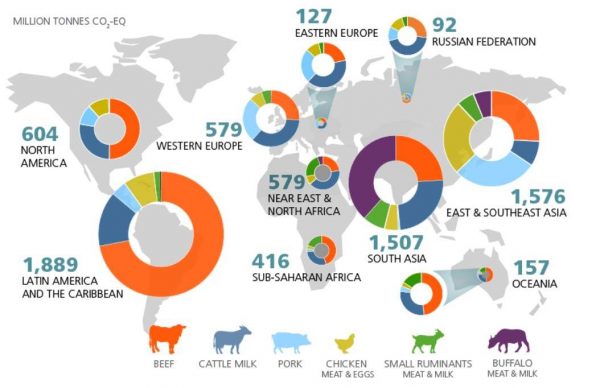 In this section, we would be focussing on the GHG emissions related to agriculture and other causes which could be primarily summarised by the below graph

CO2 is the biggest and the most common greenhouse gas responsible for the warming of the planet. The biggest source of CO2 emission is through burning fossil fuels and electricity production, followed by emission caused due to land-use changes[1].

When forests and other ecological habitats like grasslands, wetlands are converted into agricultural lands for grazing pastures or for growing animal feed, a large amount of CO2 is released in the atmosphere from the soil as well as from trees and plants [4].

In addition, a large amount of carbon dioxide is released due to animals respiration and use of fossil fuels and energy in the production process i.e. from feed production to processing and marketing of livestock products [1].

Emissions caused due to human respiration is a significantly smaller share and is accounted separately[1].

Methane is the second most abundant natural greenhouse gas and responsible for almost 16% of total GHG emissions [1].

However, Methane has 28 times more global warming potential (GWP) than CO2 over a 100-year period. i.e. this gas is 28 times more powerful than carbon dioxide at trapping heat and warming the planet [12].

Farmed animals exhale methane as part of their digestive process. This process, called Enteric fermentation is responsible for 35-40% of total agricultural-related methane emissions [3,4,6].

The other major agricultural sources of methane emissions are animal manure that is either left on soil or applied to pastures, rice cultivation and energy production [3,4,6].

Nitrous Oxide is responsible for 6% of total greenhouse emissions. However, N2O has 265 times more global warming potential than CO2 over a 100-year period [1,12].

Agriculture is responsible for 65 -75 % of total Nitrous oxide emissions, predominantly coming from animal waste left on soil and through the use of synthetic fertilizers [4,6].

Livestock is also responsible for almost two-thirds (64 per cent) of anthropogenic ammonia emissions, which contribute significantly to acid rain and acidification of ecosystems as per UN’s livestock’s long shadow report[4].

The graph below from the UN summarises the major emission sources or agricultural practices responsible for GHG emissions. 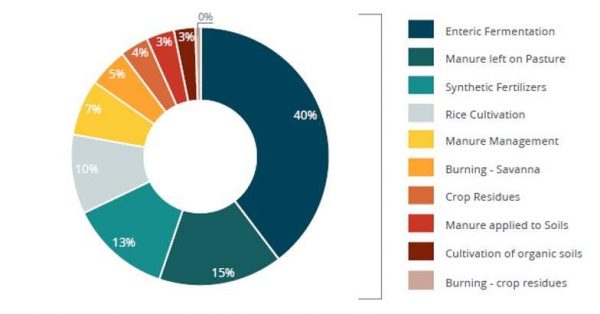 The widely anticipated impacts of global warming would be unprecedented and uncalled for. Apart from the extreme weather patterns and rising sea levels, climate change might impact our food security, freshwater levels and may lead to changes in precipitation regimes and extreme weather events to name few.

UN’s Climate change panel has concluded that human activities over the past 50 years have warmed the planet [1].

The atmospheric concentrations of carbon dioxide, methane and nitrous oxide have increased to an unseen level in the past 800,00 years [9].

As a result, Oceans, the biggest carbon sinks are taking a huge beating and after absorbing more than 30% of the total emitted carbon dioxide, they are reaching a point of saturation, referred to as Ocean acidification [9].

The acidification process has grim consequences on marine life and disrupts the ecological balance of the planet.

The global capacity of the atmosphere to absorb carbon dioxide from the earth is reduced when forests and grasslands are converted to cropland[4].

Every year millions of hectares of forests are lost, predominantly due to livestock farming which leads to billions of tonnes of CO2 released back in the atmosphere and only worsening the climate change scenarios [8].

All the above categories responsible for Methane, Nitrous oxide and CO2 emissions are expected to increase by more than 30% by 2050 unless there is a substantial decrease in meat and dairy product consumption [6].

However, is that enough? As stated before, the UN has estimated that by 2050, when the population exceeds 9 billion, the world’s food production needs to be doubled to meet the supply [2].

That necessarily means that agriculture-related emissions would also increase significantly and could be one of the biggest causes of global warming in the future.

So realistically speaking, is it possible to keep the global rise of temperature below 2°C as per the Paris climate deal without decreasing the GHG emissions from agriculture or without changing our dietary preferences? In other words, can we fight climate change by going vegan?

7: NASA Global Climate change. A blanket around the earth. https://climate.nasa.gov/causes/

7: NASA Global Climate change. A blanket around the earth. https://climate.nasa.gov/causes/